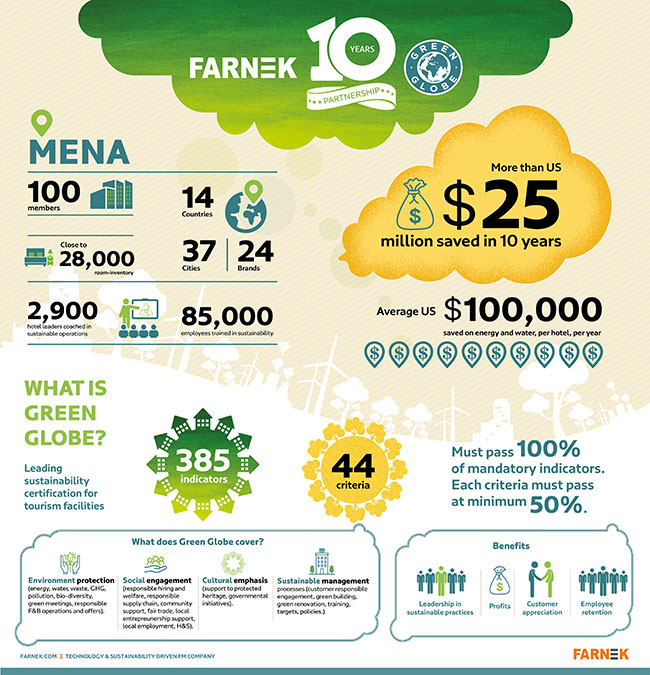 Having signed their original partnership agreement in 2009, over the past decade Farnek, working together with Green Globe, has audited and certified 100 hotels and leisure facilities from 24 different hotel chains throughout the MENA region in 38 cities across 14 countries.

Farnek has also coached over 2,900 hotel heads of departments about the process of certification, the wider environment and cost benefits of sustainability. As such 85,000 members of hotel staff, responsible for servicing approximately 28,000 rooms, will have received direct training.

“With Farnek’s support, the process of Green Globe certification, has enabled members to save over 180 million kWh of energy, worth over $20 million and nearly two million cubic metres of water which would have cost almost $5 million dollars over the last 10 years,” said Sandrine Le Biavant, Director – Consultancy, at Farnek.

“A facility can save energy and water consumption by between 5% and 20% and subsequently make significant savings on utility costs, according to Farnek’s Hotel Optimizer benchmarking data – thanks to the guidelines and precise no cost, or low-cost recommendations provided.

“Potentially an average sized, five-star city hotel can save as much as $100,000 per year and in addition, waste recycling can also achieve up to 51% diversion, generating additional income from waste rebates,” added Le Biavant.

Farnek and Green Globe have worked in tandem with a range of four and five-star properties, as well as local independent and international chain hotels such as, Moevenpick, Jumeirah, Anantara, TIME Hotels, JA Resorts and Emaar Hospitality, as well as hotel owners for whom sustainability standards and audits encourage a strong team focus on savings.

Green Globe is the leading sustainability certification for tourism facilities and businesses, providing them with a detailed framework (per department) on how to implement sustainability, practically.

“To motivate compliance to the highest international standards, Farnek’s role as an independent consultant and auditor over the past decade has been of paramount importance,” commented Guido Bauer, CEO – Green Globe.

“With increasing interest in sustainability in the MENA region from governments, corporate customers and also individuals, including the scale of leisure facilities, I am confident that in Farnek I have an innovative and trusted partner who strongly drives the agenda of sustainability. Green Globe will continue to evolve in partnership with its members, to address the challenges and opportunities that the next decade will bring,” added Bauer.

Out of the 19 requirements from Dubai Sustainable Tourism integrated in the Hotel Licensing standards, 15 are already included in Green Globe certification requirements, while other standards are related to Dubai Government’s Department of Tourism and Commerce Marketing tourism programmes.

Many Green Globe certified hotels have subsequently been recognised for their efforts through programmes such as Green Hotelier Awards, Dubai Quality Awards, Dubai Sustainability Awards and other internal green awards, organised by their own management companies.

“However, it is not just about cost-savings and awards,” stated Markus Oberlin, CEO, Farnek.

“Green Globe certification is a powerful program that can initiate a paradigm shift in corporate culture, that is not only positive for the environment and the communities in which they operate, but also fulfilling for all of the stakeholders involved, because of the depth of the programme and the stringent auditing process, members that are certified can be considered as true leaders in sustainability,” said Oberlin.